CBBC Live And Digital in Hull was a weekend of events, live broadcasts and digital activities based in and around Hull City Hall.

Contracted by ACP, the overall event production company, I fulfilled a variety of roles as is often required when budgets are tight. 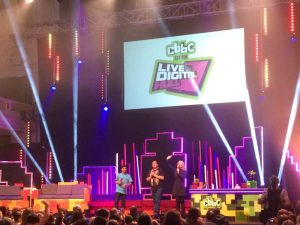 Whilst Neon Broadcast Services provided the outside broadcast unit HD1 and camera facilities for live presentation inserts into CBBC, I was responsible for providing live and recorded content to projectors inside city hall, a large outdoor LED screen located in Queen Victoria Square and various plasmas located around the building. In addition I generated a vision mix for BBC Red Button streaming. This was uplinked via the same satellite link as used by presentation and required careful coordination between the event site and Manchester MCR to ensure the circuits were switched at the correct times. I used a smaller outside broadcast van located outside city hall to deal with these feeds independent from HD1.
This was a particularly demanding job, requiring me to take the role of vision mixer, director, VT operator and engineering manager whilst generating two different sets of outputs (stage screen & live TX).
Coverage of the event on BBC website (Saturday)
Coverage of the event on BBC website (Sunday)
Pages: 1 2

Because plugging things in doesn't have to be difficult.